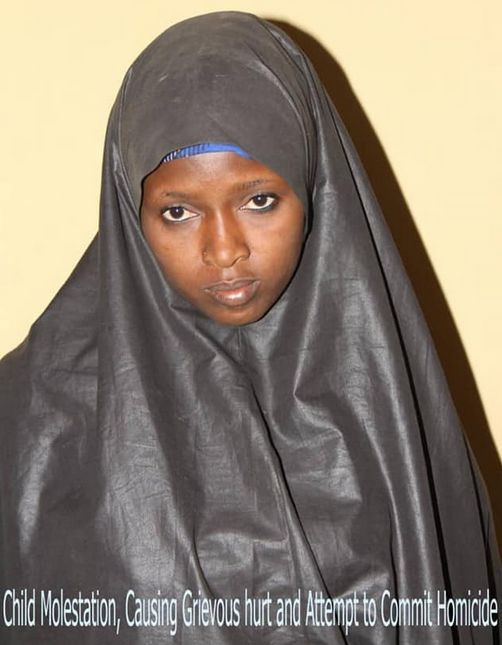 News reaching our front desk that the Bauchi State Police Command has arrested one Aisha Abdullahi Gaide for child molestation and attempted homicide.

Spokesperson of the command, SP Ahmed Mohammed Wakil, who disclosed this in a statement on Monday, March 1, said the suspect beat her 8-year-old stepdaughter Zahra Abdullahi with an electric wire and afterwards burnt her private part with lighted matches.

“On 15/02/2021 at about 1800hrs, Secretary to the State Action Committee on Gender Based Violence (SGVB), Mrs. Talatu Musa arrested and brought one Aisha Abdullahi Gaide of Kofar Durmi near Tudun Tarima Bauchi to the State Criminal Investigation Department (SCID) Bauchi with a complaint that on 14/02/2021 at about 1300hrs, the aforementioned suspect molested her step daughter identified as Zahra Abdullahi aged 8yrs of same address,” the statement reads.

“Zahra had allegedly poked at her clothes while sleeping and this provoked her step mother Aisha, who reacted by beating her with an electric wire after which she also lighted matches and put it on Zahra’s private part as a result of which she sustained high degree of injury on her private part and some part of her body.”

Wakil said that on receipt of the case, a team of detectives were drafted to convey the victim to a hospital for emergency treatment.

“The Command will delve into a high level investigation to ascertain the absolute fact of the case after which the suspect will be charged to court for prosecution/possible conviction.” he added.