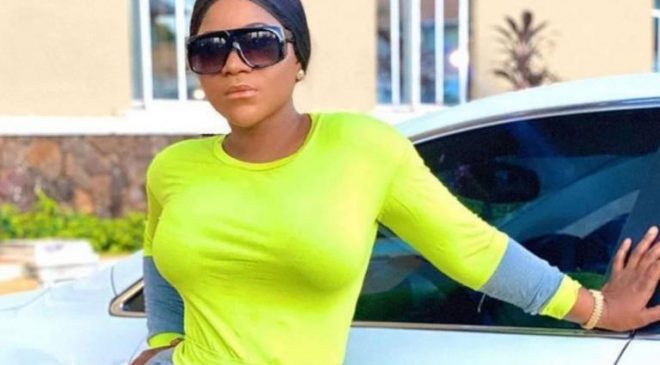 Nollywood actress, Destiny Etiko has been under fire since she posted her latest achievement on social media.

The Enugu State born actress had announced that she got herself a brand new Land Cruiser Prado SUV.

The new ride was greeted with lots on congratulatory messages from fans and colleagues.

Few days later, rumours had it that Destiny Etiko is having an affair with a married man who is also responsible for the new ride.

Topping it all, another source identified as Gistlover, also revealed that the actress is allegedly set to unveil a mansion in Enugu State, built for her by same married lover.

Gistlovers post on Instagram reads, ” Shades flying up and down: Madam hold your husband o,that house wey him dey build for this girl tell am make him no roll money out again,she wan do another surprise open house on her birthday,madam hold Oga well, Destiny is currently completing the house jackrich bought her in Enugu at centenary garden along Enugu Express road, He also sponsored her dads burial with millions,that car was supposed to come in last year during her birthday but covid held it back,cos then she was considering whether it was range rover or land cruiser,E no go better for all this Pussyprenuer o,Tueh madam if you need babalawo I go carry you go or make speed darlington show you one,make them help you deal with this girl small just getting started for person husband,Thunder where are you? I come in peace.”

She captioned the photo above she posted