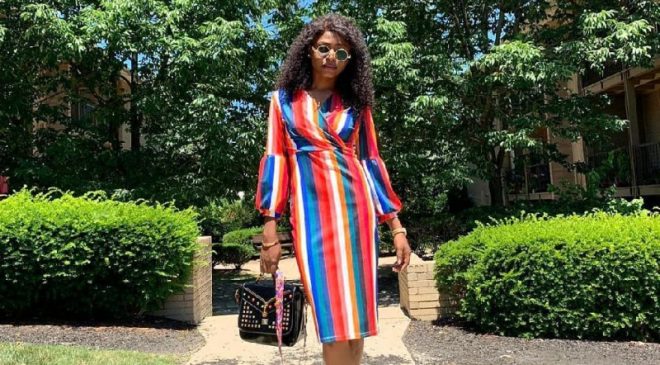 Having worked with the likes of Waconzy, Kizz Daniel and other music-stars, Louiza Williams who is the Head Artiste Manager at G-WorldWide record label is stamping her feet as one of Nigeria’s most critically acclaimed artistes’ managers. In this interview with eelive.ng, Williams reveals how she got into the entertainment industry and the grills and dynamics of her job.

How does it feel to be part of the few female artiste managers in Nigeria?

Honestly, it feels great. I’m so excited to have made a good impact in an industry dominated by the opposite sex. It is fulfilling.

How did you get into the entertainment industry and what were you doing before then?

I got into the entertainment industry at a tender age. I schooled at the University of Calabar where I studied Chemistry. Back then, I used to pitch artistes to perform at the famous Calabar carnival through my uncle, Mr. Patrick Ogar who works at the Governor’s office.

My uncle was a scholar and he wasn’t supportive with the performance slots at first because he had always wanted me to go for a medical course and further my education rather than disturb him for entertainment platform for artistes. But he later saw the passion in me and decided to encourage the young, Louiza Williams. My journey started that very moment.

I was also a part of a small movie group called Basleno films led by a professor at the Theatre Arts Department in UNICAL. But I have always enjoyed being behind the cameras and learning the process of grooming budding talents into stardom and I was very curious about the entire process of birthing movie and music stars.

So I later picked interest in script writing and was appointed as the production coordinator in the movie group. One evening, I got a phone call from my Dad for an opportunity to study film making at the New York Film Academy through another uncle of mine, Hon. Solomon Okpa, and being that all these came from my family; I quickly grabbed the opportunity when it showed up before they had a change of mind.

See Also :  Cheating Girlfriend Disgraced After Twitter User Tweeted About Her Conversation In A Taxi

After attending the film academy, I produced and directed a few music videos, short films and beauty pageant shows and then Waconzy’s management deal came through. Afterwards I joined G-WorldWide Entertainment in 2014. I got a management deal to manage Kizz Daniel, Sugarboy and the record label. That was how I got here.

What other artistes do you manage outside the record label?

I manage only G-Worldwide artistes. I’m not really interested in managing other artistes but I render consulting services. I feel it’s important to start with an artiste before popularity; most times they won’t respect you. I like to groom artistes from the beginning. It’s just like bringing up a child, the child will grow up with the lessons you’ve taught him/her. Some artistes have this mindset of ‘I blew without you’ so I don’t know how to condone disrespect from artistes.

Was there ever an existing fear surrounding being a female artiste manager? Did you think it was going to be hard for you to break through?

I wouldn’t say there was an existing fear. But along the line fear showed up after the success of Woju and the remix, I was scared of sustainability because expectations from fans, media and the industry became too high but then, I remembered that “inactions breed doubt and fear while actions breed confidence and courage”. It kept me on my feet and my lovely G-Worldwide team put in more actions and we pulled through with Laye which was another smash hit and we became a giant music label in Africa as our artistes kept dishing out hits after hits and fear became a thing of the past.

I didn’t think it was going to be hard for me to breakthrough because I was determined and I came prepared knowing how much grace I had, challenges popped up as usual but I survived it thankfully.

Have you ever been disrespected by the artistes you’ve managed so far?

Apart from Waconzy, that I managed before G-Worldwide, I have never managed any other artiste outside the label so I have not experienced it before.

What distinguishes a good artiste manager from a bad one?

It is basically knowledge and its application. Knowledge of your brand, its product, the market, weaknesses, strengths and then exchange of value. As a good manager, acquire knowledge, apply it effectively and be successful or despise knowledge and become a PA to your artiste instead.

There has been a lot of discussion about gender equality in the entertainment industry what are your thoughts on sexism in music and particularly how it affects women?

Sexism has remained a constant struggle and this thought pattern has made it difficult for women to strive for top positions in the industry. I would go with the popular saying that ‘all men are born equal’. Man in this context implies all humans. There should be no reason why a certain gender should see the other as subordinates. I always urge women to know their craft and invest in personal development. So, when they start knocking on those seemingly impossible doors; no one will tell them jack about the traditional stereotype gender roles.

Do you see yourself going back to the Chemistry lab?

No, I don’t. I didn’t have a passion for it at all from the outset but I only did that to fulfill all righteousness. I knew I was going to pursue what I loved.

If you were to change anything in the music industry what would it be?

If I was to change anything in the music industry it would be the disagreements between artistes and record labels and the way they end business relationships.

Who is Louiza Williams? Are there any childhood experience or exposure that may have shaped you into becoming who you are today?

Louiza Williams Ogar now known as Louiza Williams Taginere is a smart, intelligent young lady from Netim in Cross River State who is paving her way through local and international borders, constantly breaking boundaries and setting new records as a talent/music manager and film producer. And yes, there are childhood experiences that have shaped me into becoming who I am today. My childhood was good. I have loving parents who raised me in a godly manner. They did their best, gave me good education which is what every child deserves. My parents are disciplinarians. I come from a no nonsense family where both the male and female gender is treated equally. I will say God made everything work in my favour.

In your experience, what are the mistakes that ruin the careers of musicians?

Musicians end up having failed careers due to lack of funds, poor management structure, lack of continuity plan, not being able to identify their audience, lack of legal counsel, inability to manage fame and money when success comes, pride, lack of adequate knowledge of the business, wrong execution of business plan, disloyalty, indulging in drugs, unhealthy competition and being too quick to leave the team that brought them to limelight. A tree cannot make a forest.

You mentioned that you are into film making, have you produced any movie so far?

My debut movie, Suga Suga will be coming to the cinemas by the first quarter of the year. It features Taiwo Ibileye, Charles Inojie and other superstars. Watch out for the mind blowing blockbuster.