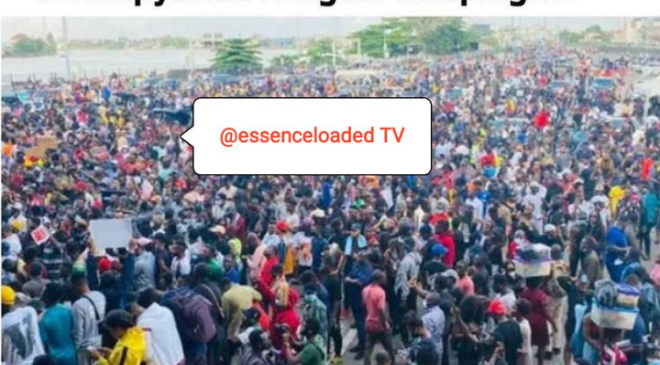 A campaigner of the #OccupyLekkiTollgate planned protest, Wole Olubanji, says the demonstration scheduled to hold on Saturday, February 13, is legitimate. Olubanji spoke on a PUNCH Live program on Tuesday.

The PUNCH had reported that soldiers attacked #EndSARS protesters at the Lekki Toll Gate on October 20, 2020. But the Judicial Panel of Inquiry which took over the Toll Gate decided to hand it back to the operators, Lekki Concession Company last Saturday.

Speaking on Tuesday, Olubanji said the #OccupyLekkiTollgate campaigners would protest at the toll gate in resistance against its planned reopening.

According to him, the Lekki toll gate is a symbol of ‘death’ but it must be turned to a symbol of ‘victory’ and justice for injured and slain #EndSARS protesters last October.

The campaigner also said those organizing counter protests only want to defend personal interest and the interest of the owners of the Lekki Toll Gate.

He, however, said they also have a right under the constitution of the Federal Republic of Nigeria. “Let them do their protest and let we the #OccupyLekkiTollgate protesters do ours without any altercation,” Olubanji said.

On whether there was need for police approval for the protest to hold, the campaigner said there was no need for such as it was a sign of military regime.

Olubanji further said some persons don’t want the #OccupyLekkiTollgate protest to hold because they don’t want transparency of the probe of victims of the Lekki Toll Gate on October 20, 2020.

See Also :  Nigerians are colorists – Tolanibaj says as she agrees with the statement that her fanbase is low due to her skintone

“There is no problem for people saying they want to defend Lagos, we also want to defend Lagos by demanding transparency, “he said, adding that the government would further exposed itself as” a tyrannical government “if it moves against the protest by declaring a curfew or sending security forces to harass campaigners at the demonstration. ground.