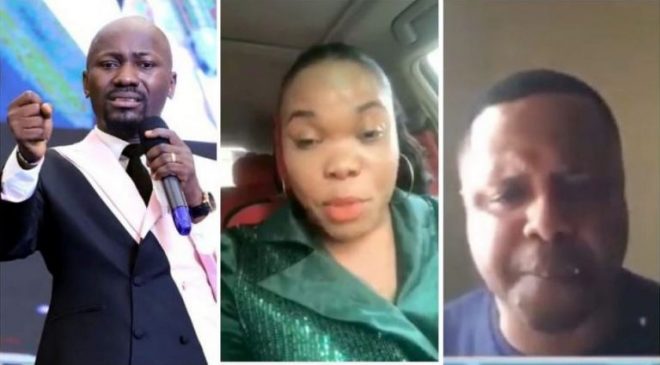 In the recorded call which is about 42 seconds long, a voice which sounds like that of Apostle Suleman is heard threatening to make Davids disappear.

According to a report by The PUNCH, Mr Mike Davids, a former Pastor with Omega Fire Ministries, has released an audio clip in which the General Overseer of the church, Apostle Johnson Suleman, is heard threatening to “make him disappear”.

Although The PUNCH could not independently verify the authenticity of the clip, the voice sounds like that of Apostle Suleman.

The audio clip was said to have been recorded during a phone conversation between Apostle Suleman and Davids shortly after Davids made a viral video accusing Suleman of sleeping with his wife, Pastor Faith Edeko, in the presence of their young daughter.
Both Suleman and Edeko have since denied the allegation.

In the recorded call which is about 42 seconds long, a voice which sounds like that of Apostle Suleman is heard threatening to make Davids disappear.

Apostle Suleman also curses Davids, telling him he will never amount to anything in life.

Suleman says, “I avoided you because of the way you talk but it is clear to me that you are possessed with a demon. The same thing that made me avoid you, you keep repeating them. You will die prematurely. God will punish you. Whatever you are looking for in this life, you will not get it.

“When I noticed it because I am very temperamental; my temper is not good. That is why I am telling you tonight. I will make you disappear.”

When Davids asked him to explain what he meant by making him ‘disappear’, Suleman allegedly responds, “You are a bastard. Get off my phone” before the conversation ends.

It was learnt that the audio clip had been sent to the Nigeria Police Force as part of a petition against Apostle Suleman.

Davids has also sued Apostle Suleman for N2bn, accusing the cleric of interfering in his marriage.

In his response, however, Apostle Suleman’s legal team stated on Friday that the cleric had filed a N5bn libel suit against Davids.

The legal team described Davids as one who was angry for being expelled from the church for his bad behaviour and was on a revenge mission.

Apostle Suleman’s legal team further stated that a complaint had been filed against Davids and that the police would arrest him soon.