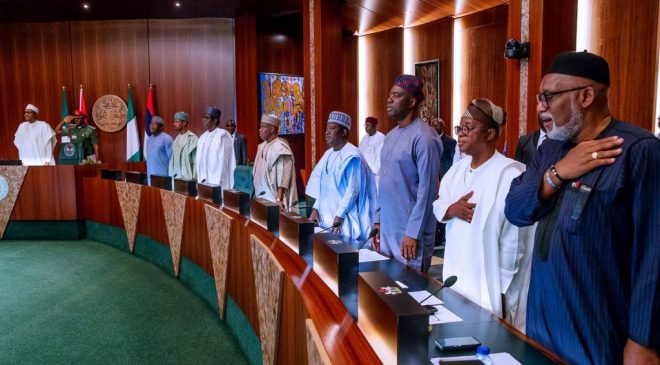 State governments on Monday explained obstacles to the enforcement of COVID-19 Health Protection Regulation 2021, which was signed by the President, Major General Muhammadu Buhari (retd.) on January 27.

Our correspondents, who monitored major cities across the country on Monday, observed that many residents were not complying with COVID-19 protocols such as wearing of face masks and social distancing.

Officials of state governments, including Cross River, Akwa Ibom, Enugu and Niger, who spoke to The PUNCH on Monday explained difficulties in enforcing the safety rules as the police vowed to use “coercive measures” to ensure compliance.

According to the regulations signed by the President, any person that contravenes provisions of the regulations, upon conviction, risks a fine or a term of six months imprisonment or both in accordance with Section 5 of the Quarantine Act.

The Enugu State Commissioner for Information Mr Chidi Aroh, said with the high level of non-compliance, mass arrest of people would be difficult.

Commenting on the COVID-19 rule enforcement, the Cross River State Commissioner for Health,  Edu, said, “The political will is not strong all the way down. We need that political will. It should not stop at the level of the President signing an Executive Order. There should be discussions at the level of governors’ forum for them to agree on it and map out strategies on how to go about it and getting support from the Federal Government.

“There is a lot of COVID-9 fatigue right now. Government is fatigued. Individuals are fatigued,  even funding.”

According to him, during the first wave of COVID-9, it cost the state N10m daily to fund a task force that enforced the use of face mask.

“The task force was in the metropolis and border areas. Imagine that you run that process for 30 days, that is N300m. You have to fuel the vehicles, pay the security officers to follow the task force.

“If you calculate all these costs, you will see that it is a lot more difficult to enforce. At this point, it is necessary for the Federal Government to sit with the state governments and discuss their challenges and ways they can be assisted.

The Federal Government and the states should commit funding into the enforcement and let them work hand in hand and implementation will be good and smooth. But we need that level of collaboration at this point so that things can happen.”

On its part, the Akwa Ibom State Government said it was the duty of police to ensure enforcement of the protocols.

Ememobong, who stated this, disclosed that the state government had been working with traditional and religious leaders to stop the spread of COVID-19.

“As a government, we have set in motion machinery for sensitisation. We are still doing sensitisation; we run jingles and interface with traditional and religious leaders but for enforcement it’s the duty of the security.”

The  Enugu State Commissioner for Information, Aroh, said effecting mass arrest of people who were not COVID-19 protocols compliant in a market would be difficult.

According to him, arresting people for non-compliance to protocols will not solve any problem.

He stated, “On the directive of His Excellency, the governor, all the government officials have been directed to engage in sensitisation in their communities. The ministry of education is monitoring schools to ensure total compliance to COVID-19 protocols in our schools especially in the areas of non-pharmaceutical measures in the management of COVID-19.

If you jail everybody in Ogbete Main Market, it won’t change anything – Commissioner

“We have not jettisoned enforcement, but we are combining all the factors. Enforcement alone will not solve the problem. If you carry everybody in Ogbete Main Market to a correctional facility, it will not change anything.

“There wouldn’t be space to accommodate them. So while  security agencies are trying their best to increase the level of compliance, we are more interested in bringing the moral standards; with a reason that we all need to be alive.”

The Niger State Commissioner for Health,  Muhammad Makusidi,  said the nonchalant attitude of residents of the state was one of the obstacles to compliance with the safety rules.

He said, “To ensure compliance, we involved state transport union, market people,  religious and traditional  leaders, and women in the COVID-19 task force  which are to ensure all inclusiveness,  sadly, everybody is showing nonchalant attitudes.”

But  the Chairman, Ekiti State COVID-19 Response Task Force, Prof Bolaji Aluko, said the new COVID-19 protocols, which enjoined the federal security agencies to act, were being enforced in the state.

Aluko said, “As part of the enforcement, people can no longer do any event without permission. Every day now, I sign a minimum of 10 permissions for burials, weddings and other events and in the permissions, the people have to pledge to obey COVID-19 protocols.

“Personal responsibility is necessary. We have to keep trying to make the people do the right things, at the end of the day, these things are in the interest of the people, to prevent them from contracting COVID-19,” the state COVID-19 Response Task Force chairman said.