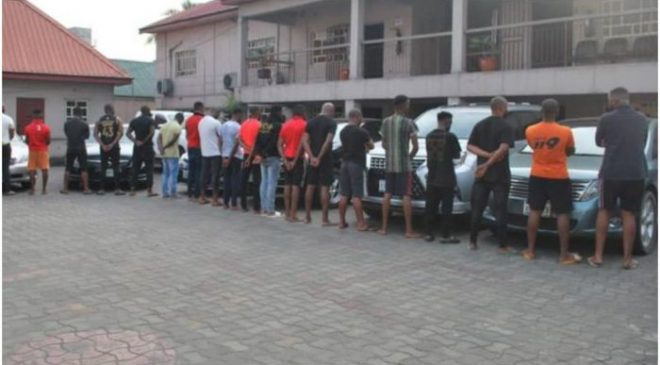 Twenty, 20, suspected internet fraudsters were on Friday arrested by operatives of the Port Harcourt Zonal Office of the Economic and Financial Crimes Commission, EFCC.

The commission in a tweet on Monday said the suspects were arrested at 021 at New Owerri, Eminike Estate, Norble Abode, Owerri, Imo State.

Items recovered from them include: Forty (40) mobile phones, seventeen (17) laptops of different brands and six (6) vehicles: one (1) blue-coloured Toyota Corolla car; one (1) black-coloured Acura ZX car; one (1) ash-coloured Lexus GX 460 Sports Utility Vehicle; one (1) green- coloured Venza car, one (1) black-coloured Mercedes-Benz car and one (1) ash-coloured Lexus 330 SUV. Others are thirteen (13) Powers of Attorney, five (5) architectural documents and a folder containing some other documents.

EFCC added that the suspects would be charged to court when investigations are concluded.